A fire extinguisher with increased accessibility through auditory and visual aids.

The X-It Fire Extinguisher provides users with auditory and visual aids to increase communication and accessibility between product and user.
Electronics inside the handle communicate with the home fire alarm system, triggering an alarm through the speaker at the back of the handle, alerting the user of a fire. The clear top of the button houses an LED that begins flashing to further alert and guide the user to the extinguisher. It also acts as an affordance, indicating an important action area. Once picked up, the unit provides auditory step-by-step instructions on how to use it. 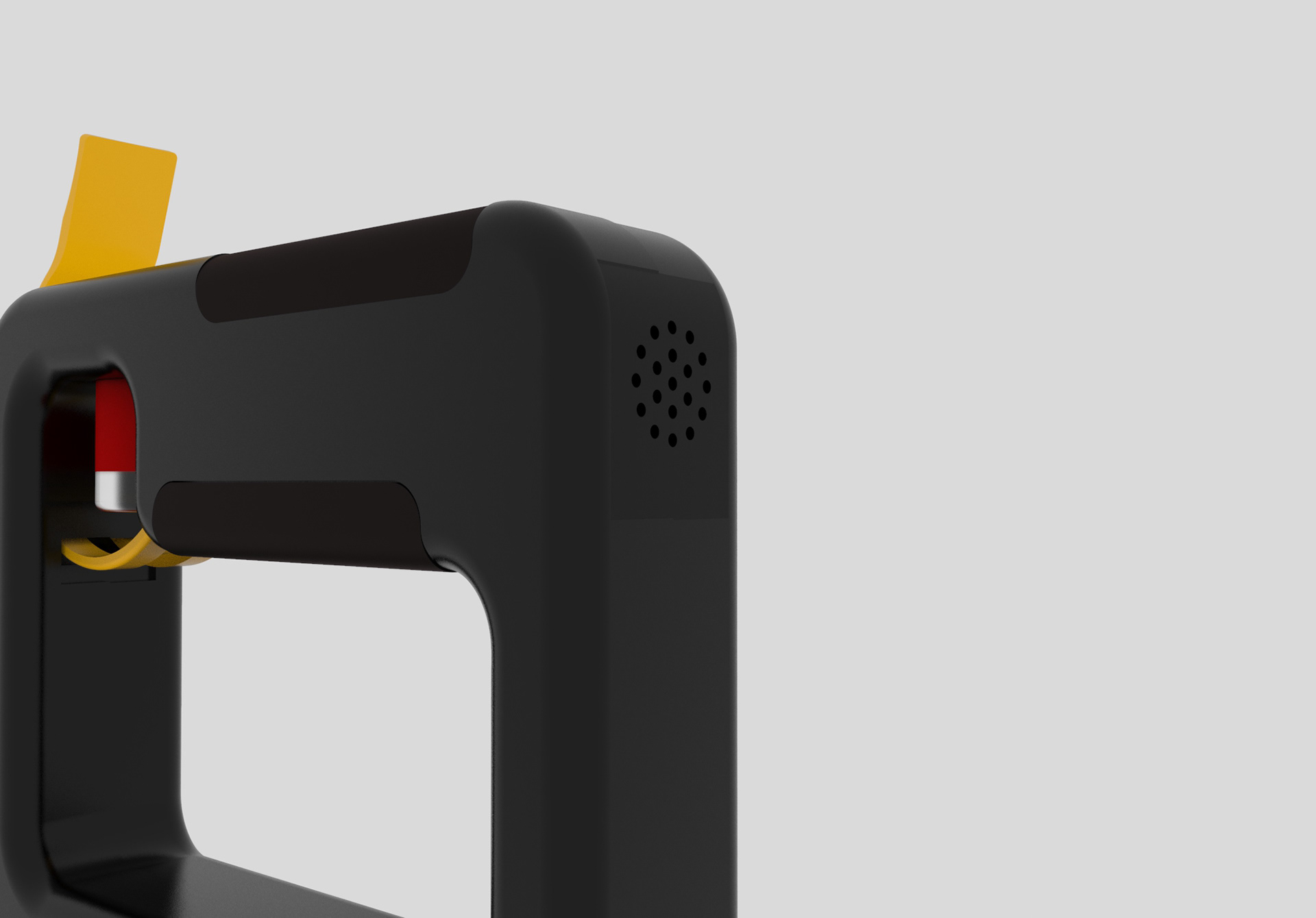 A speaker at the back of the handle communicates with the home fire alarm system to alert the user of a fire. Once picked up, the unit provides auditory step-by-step instructions on how to use it. 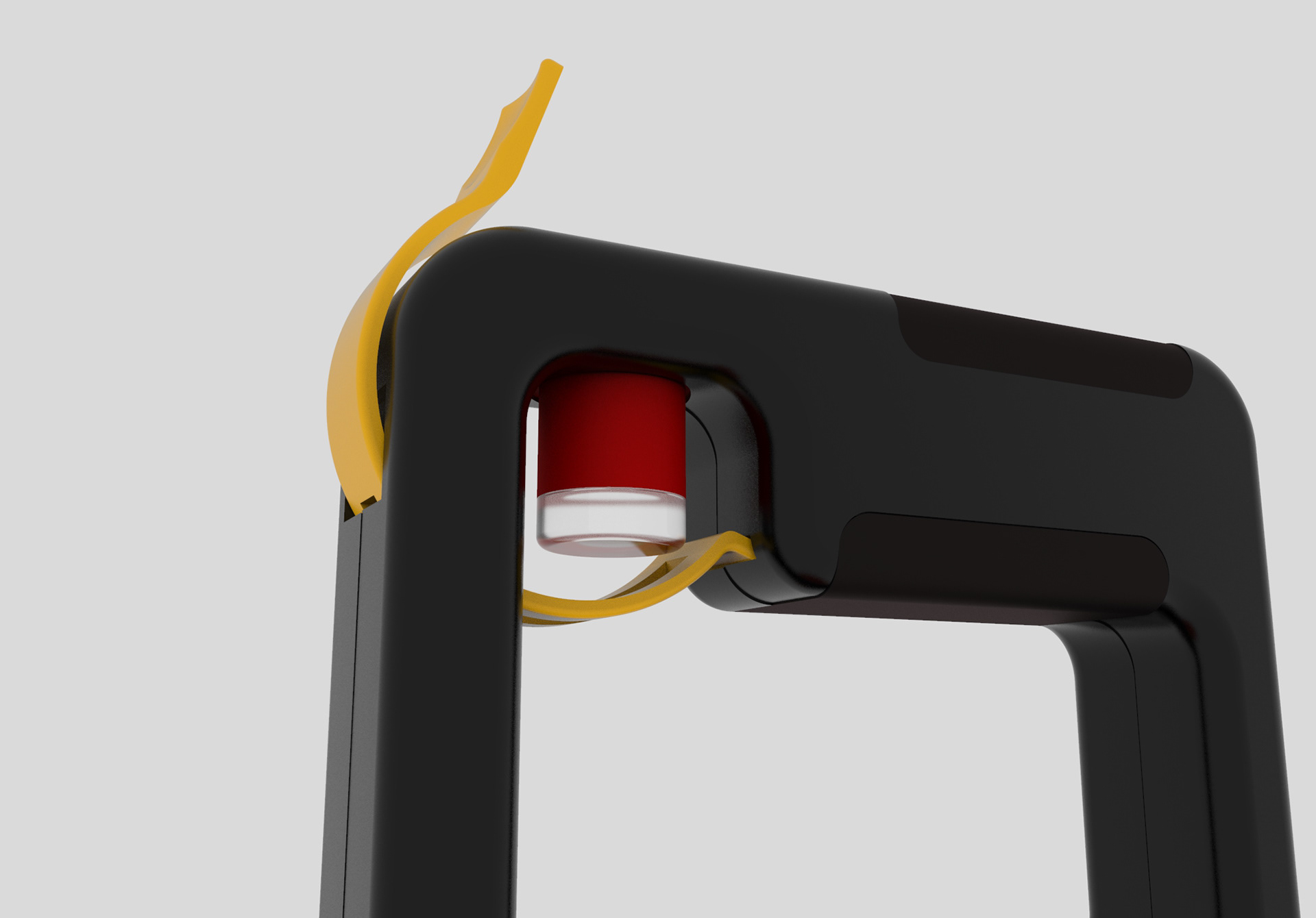 The clear top of the button houses an LED that flashed to visually alert and guide the user to the extinguisher. It also acts as an affordance, indicating an important action area.

Use scenario
The acronym P.A.S.S. illustrates step-by-step instructions:
P: Press down on the yellow pin to access the button.
A: Aim the nozzle at the base of the fire.
S: Squeeze the button to release the agent.
S: Sweep the nozzle from side to side. 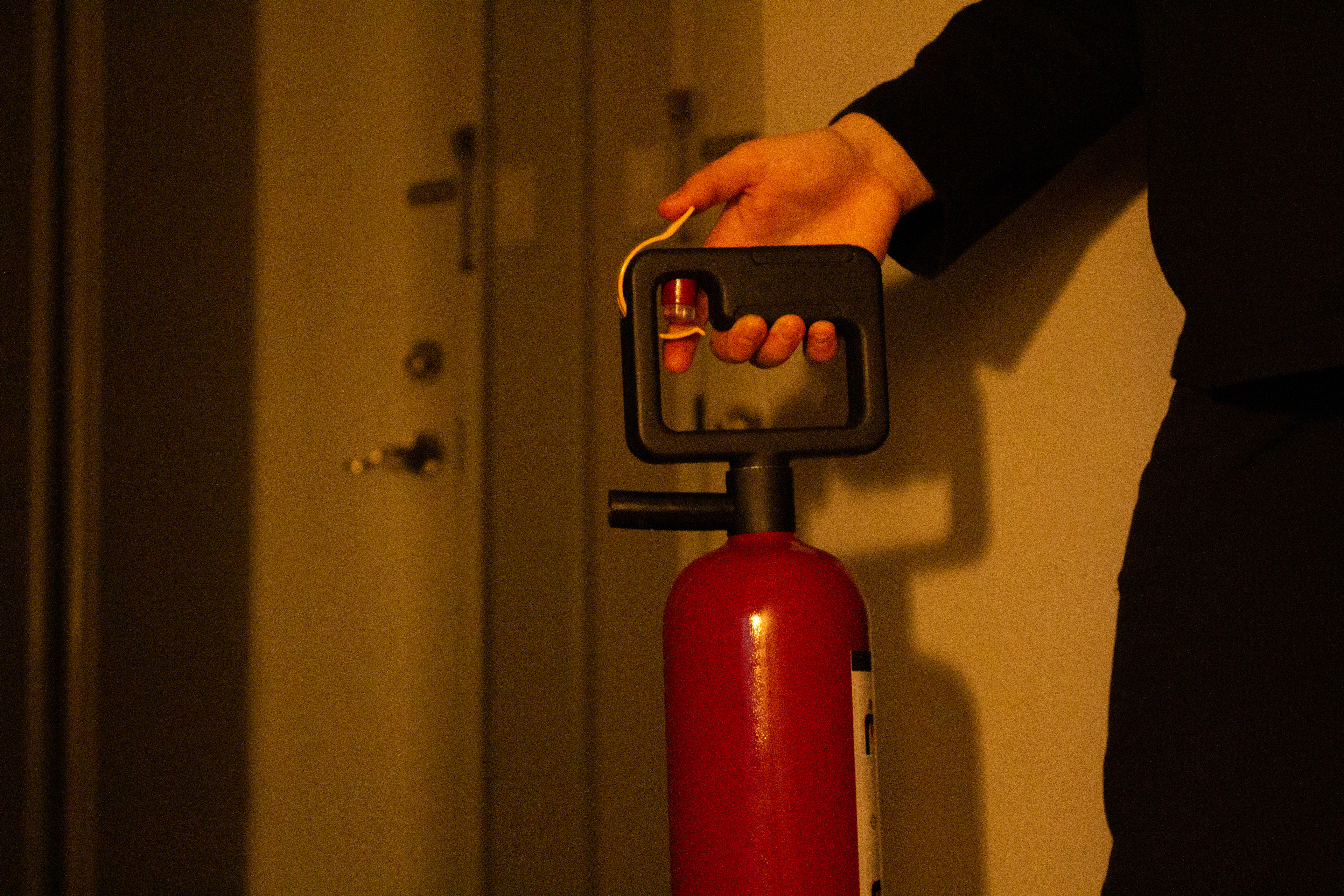 Press down on the pin to allow access to the button. 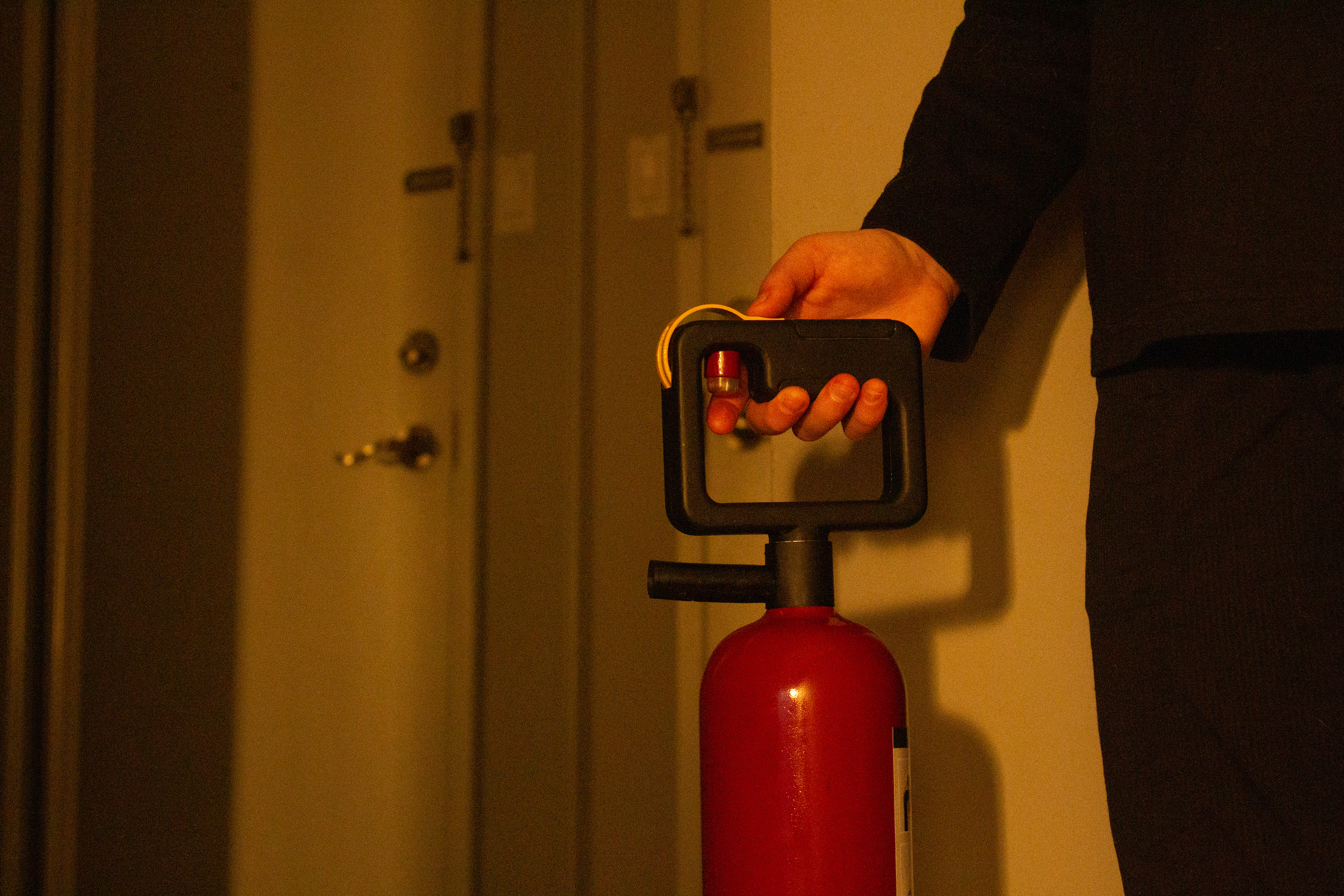 Squeeze the button to release the agent. Once the button is squeezed, agent is released from the front nozzle.

Graphics
The redesigned P.A.S.S. label features simplified graphics illustrating step-by-step instructions. Regulatory and other less important information is placed on the front of the canister to avoid visually overwhelming the user when they're faced with an emergency. 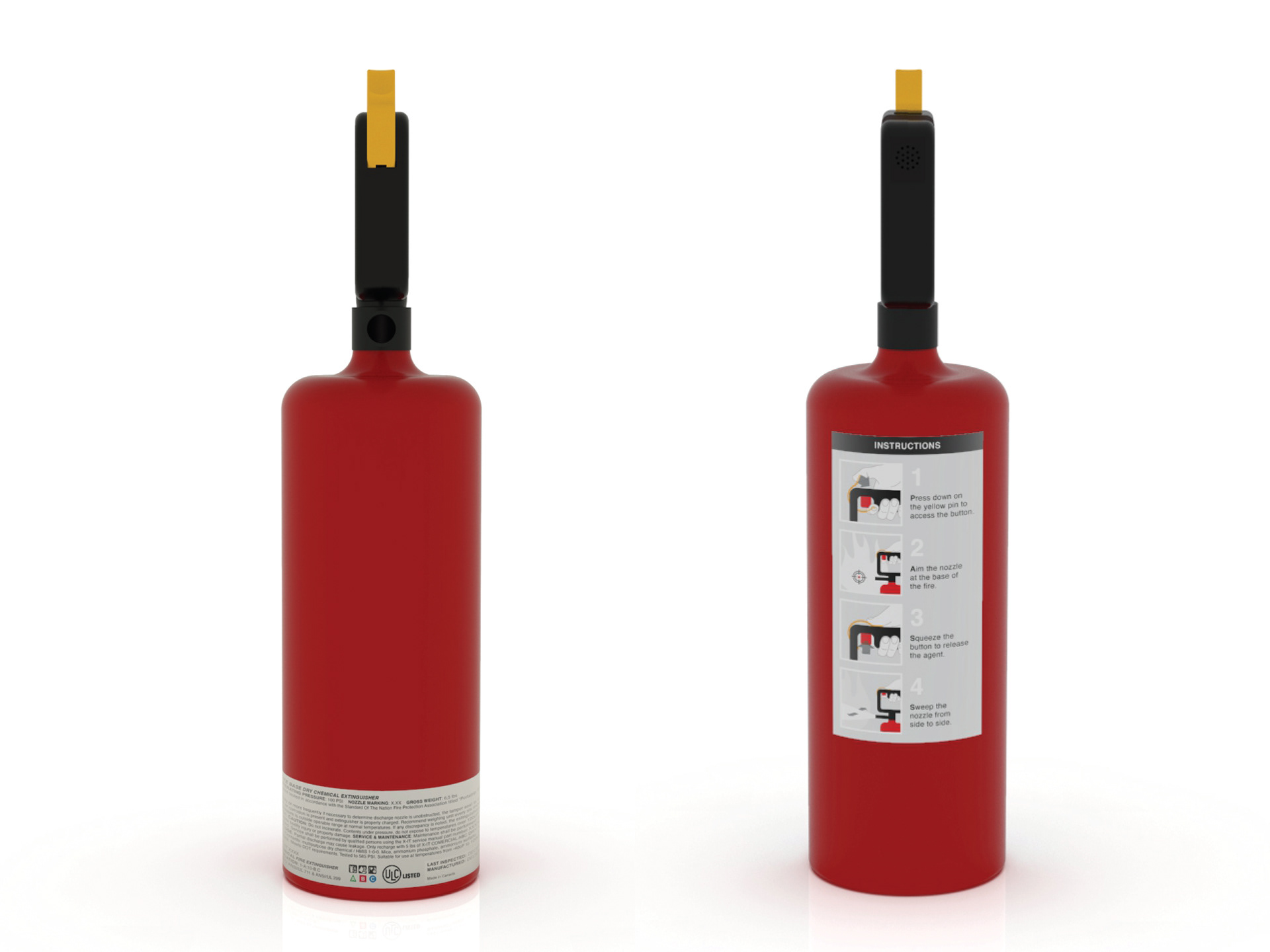 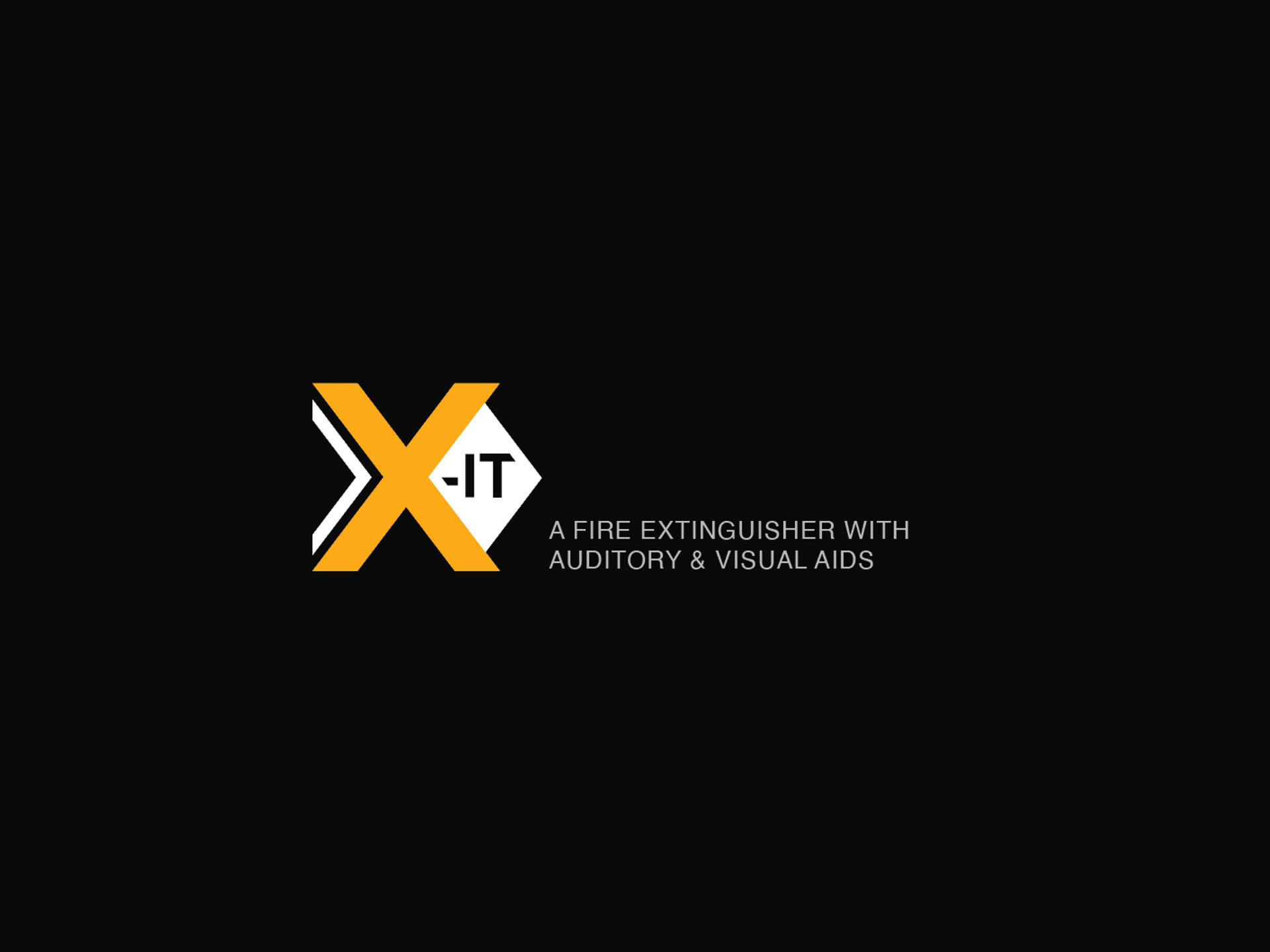 Logo and slogan created for the fire extinguisher.

Visual Model
A visual model was put together, showing the final form of the extinguisher canister. 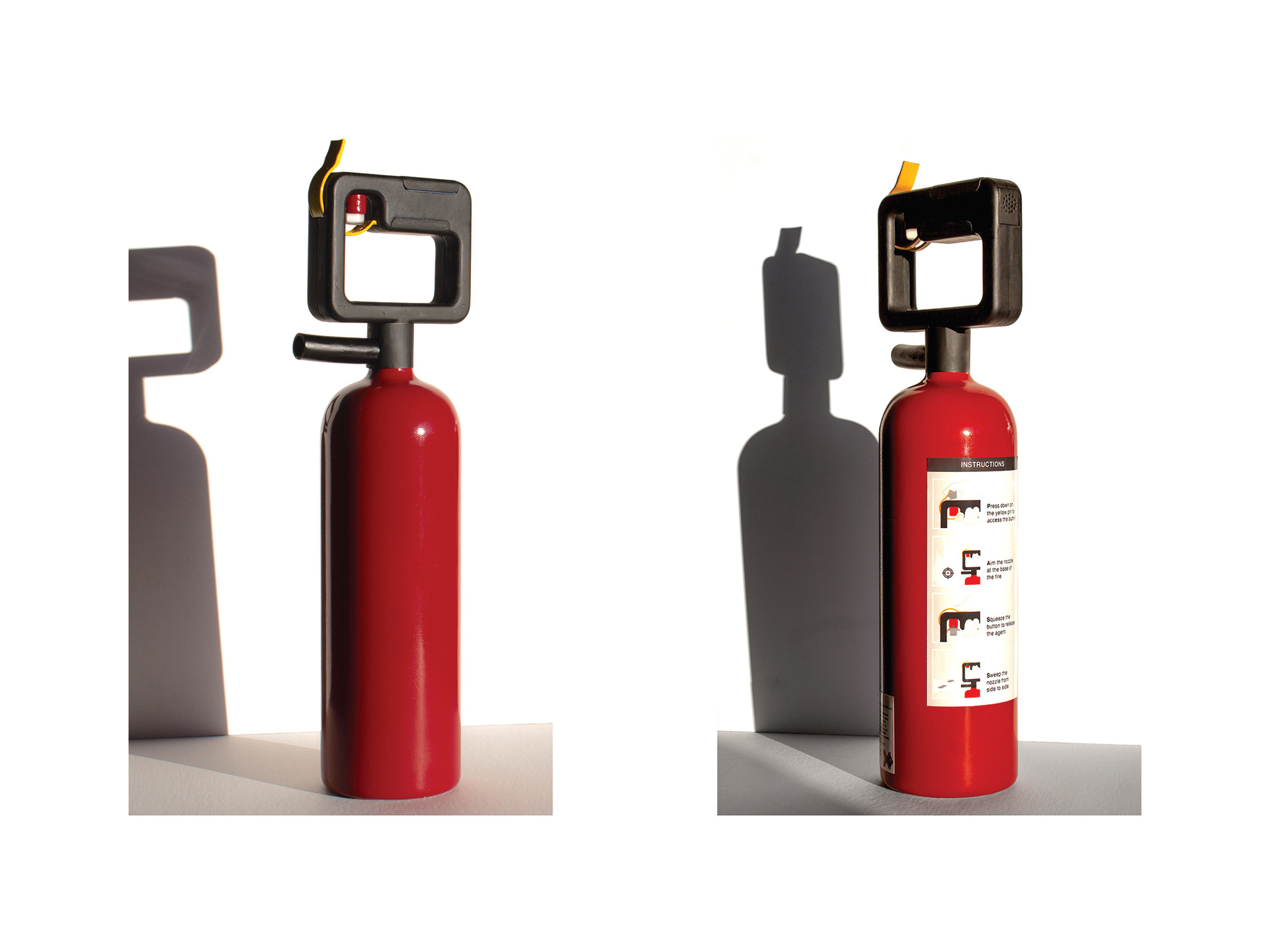 Visual model without graphics (left) and with added graphics (right). 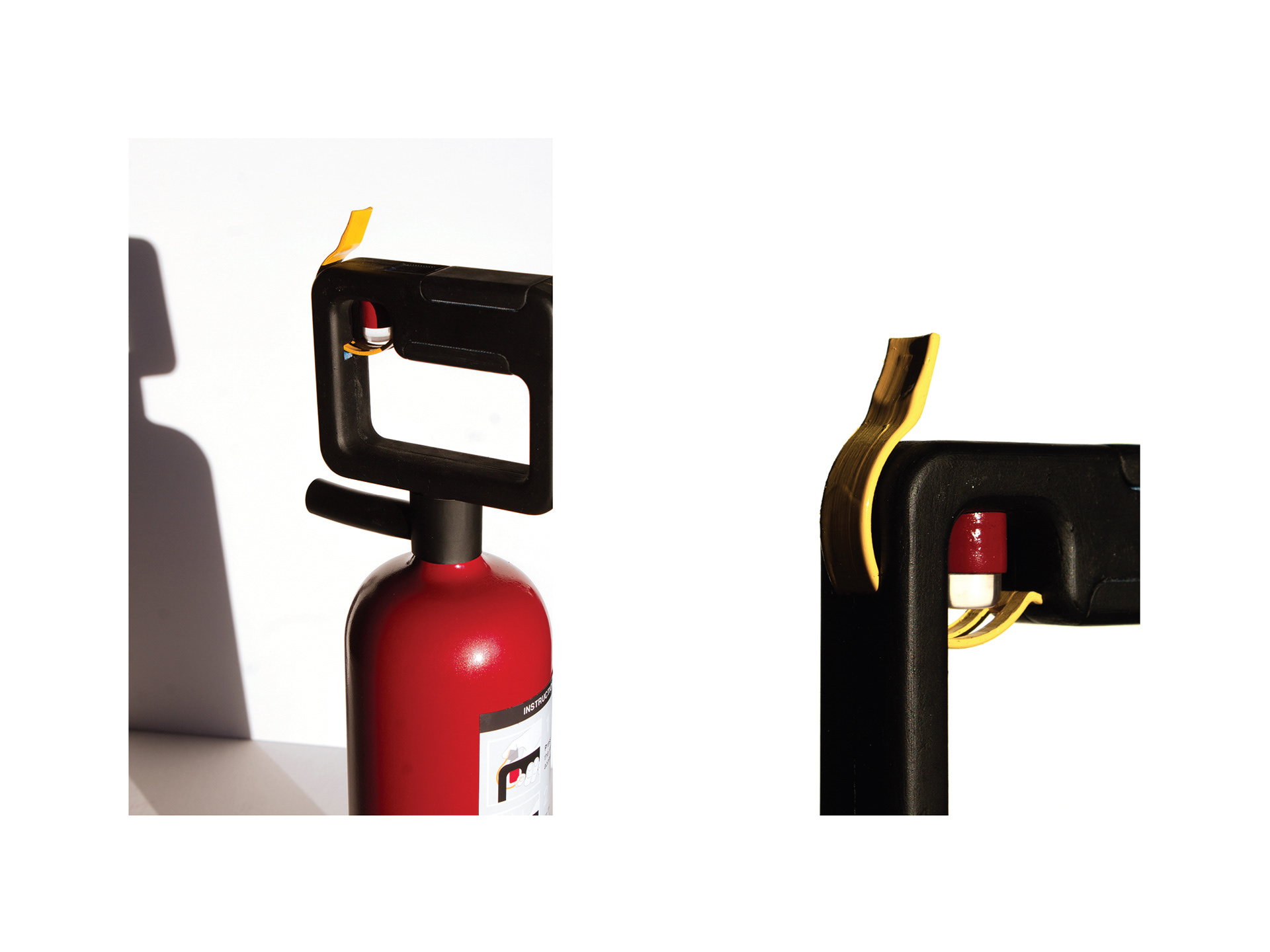 Functionality & Electronics
The handle houses a PCB (printed circuit board) with electronic components that allow it to communicate with the user through visual and auditory cues. A Bluetooth chip communicates with the home fire alarm system. When a fire is detected and the fire alarm sounds, the bluetooth chip triggers a flashing LED in the button and an alarm to sound through the speaker, guiding the user to the extinguisher. Once the extinguisher is picked up, a motion sensor is triggered, prompting auditory step-by-step instructions to be delivered through the speaker. 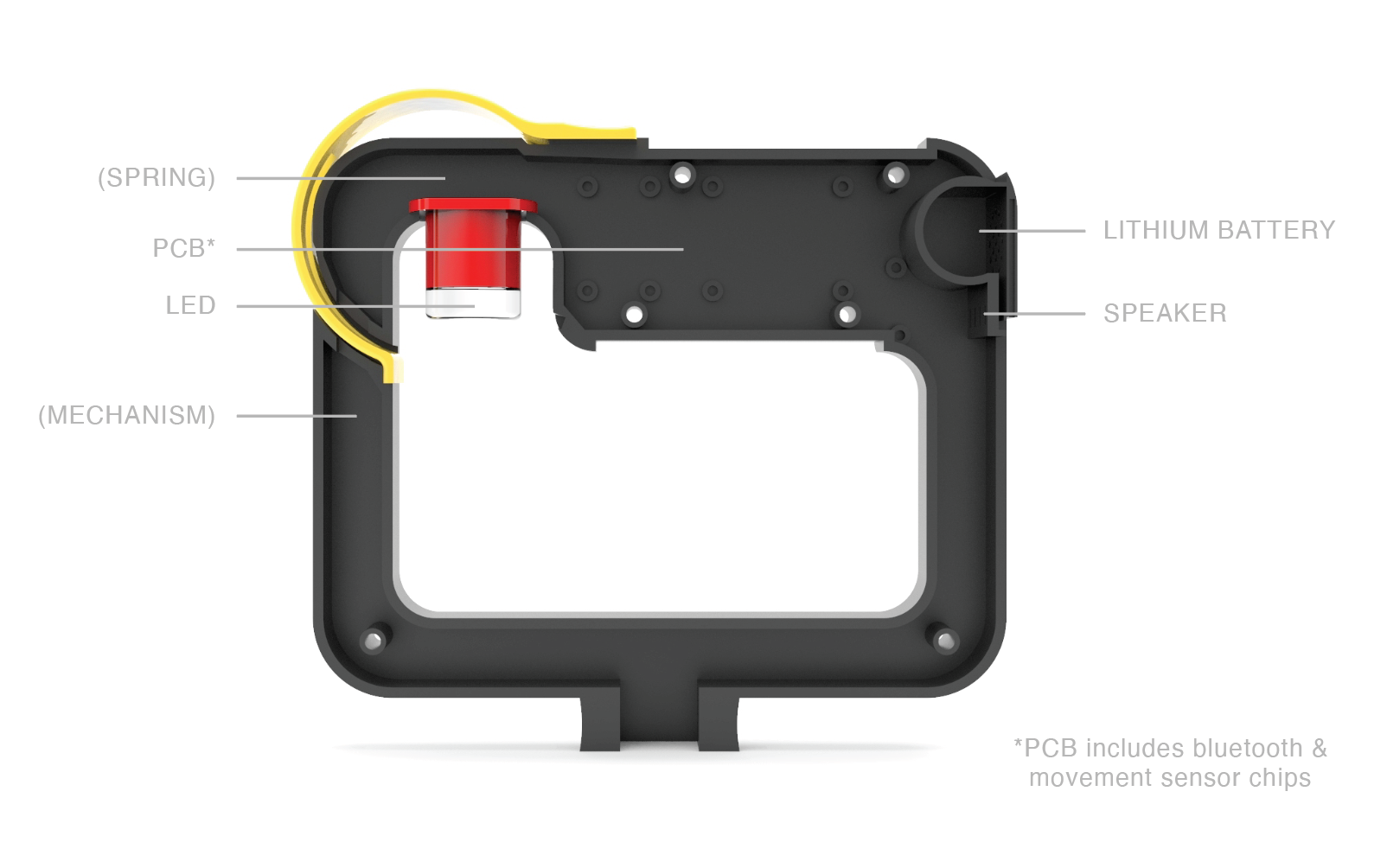 Internal components housed in the handle include a PCB with bluetooth and movement sensor chips, an LED, a Lithium battery and a speaker. 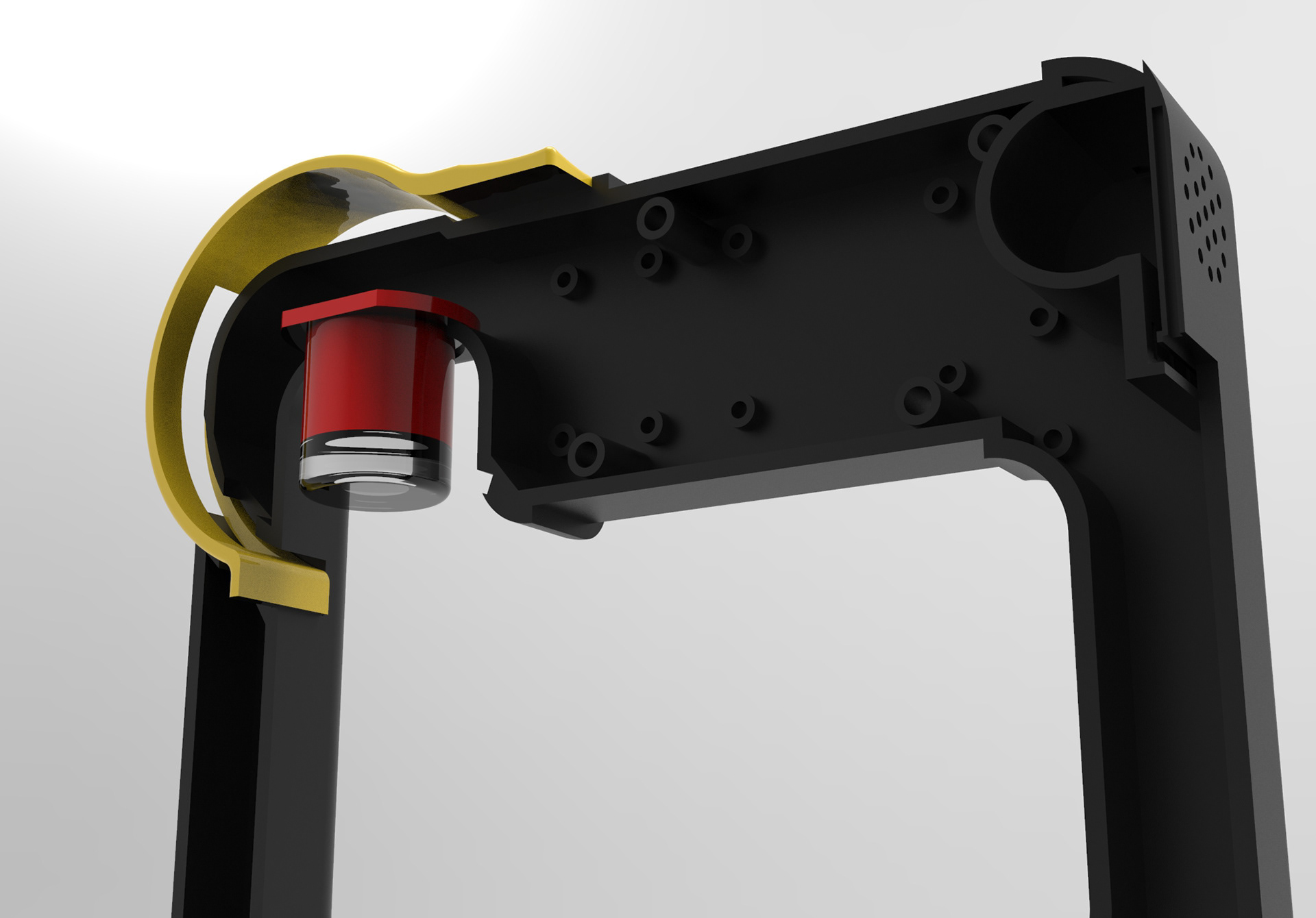 Bottom side view of the internal housing. 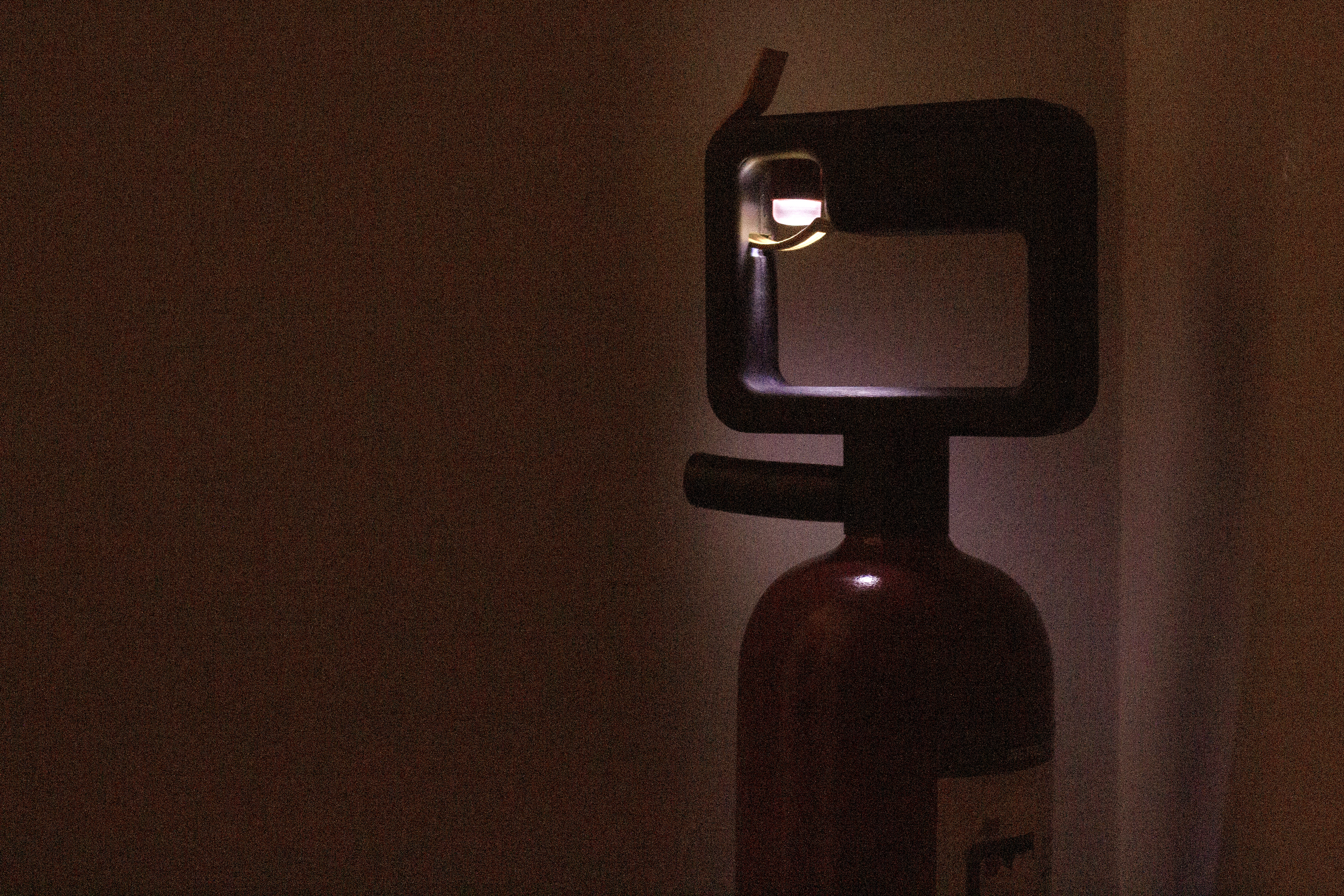 The visual model shows a flashing LED in the button to indicate the location of the fire extinguisher.

Manufacturing
If manufactured, the handle components would primarily be injection-molded ABS for its dimensional stability, tensile strength, stiffness and resistance. The grips on the top and bottom of the handle would be rubberized to provide proper grip, but would intentionally not be overmolded to the rest of the handle to ensure technicians would still be able to access the internal components, allowing the handle to be repaired when possible (instead of being discarded). A clear acrylic cap would be added to the top of the button. The pin would be anodized aluminum to give it its yellow colour. Black was intentionally chosen for all handle parts except for the button (red) and the pin (yellow) to allow those parts to act as clear affordances, indicating important action points.

THE DESIGN PROCESS
Research
Before the design process could begin, thorough research had to be conducted to determine areas that needed improvement with current fire extinguisher models. This research was conducted with a group of three other students including Khalil Akkacha, Mitchell Lebrun, and Piers Waldie. It allowed us to understand that the current fire extinguisher has not seen many changes to its form or functionality in decades. In part, this is due to how efficient and cost-effective its manufacturing has become. Extensive laws and regulations must also be considered as this is an emergency device.

As part of this research, a survey was conducted with 112 participants. The graphics above illustrate the findings of this survey. Of particular interest to me was the lack of knowledge and discomfort individuals noted regarding fire extinguisher use. Only 63% of participants reported knowing how to use a fire extinguisher (with or without previous training or experience).
32 of the 112 individuals surveyed noted that they would not be physically and/or cognitively capable of using a fire extinguisher in the event of an emergency. An overwhelming 27 of these participants indicated knowledge of use and clarity of instructions as their main concern. Limitations reported include physical limitations such as hearing and visual impairments, as well as cognitive disabilities and neurodiversity such as Autism, ADHD and Dyslexia.​​​​​​​

This research allowed me to determine that the redesign would focus on creating a more accessible fire extinguisher by increasing the overall communication between the product and the user.
-  Product affordances, such as colour and form, help the user distinguish action areas;
-  Visual aids guide the user to the extinguisher;
-  Auditory aids guide the user through step-by-step instructions for operating the extinguisher;
-  Revised graphics provide simple, streamlined visual references with step-by-step instructions.
The Redesign
It was determined that the redesign would focus primarily on the handle to minimize the overall amount of changes to the product, ensuring individuals who know how current models work can still operate the redesigned model in a similar manner.
Early sketches and form prototypes explored basic ergonomics in the handle. A priority here was to ensure it could be used ambidextrously and single-handedly, as the traditional fire extinguishers required both hands to operate and favoured right-handed users by placing the pin on the left side. 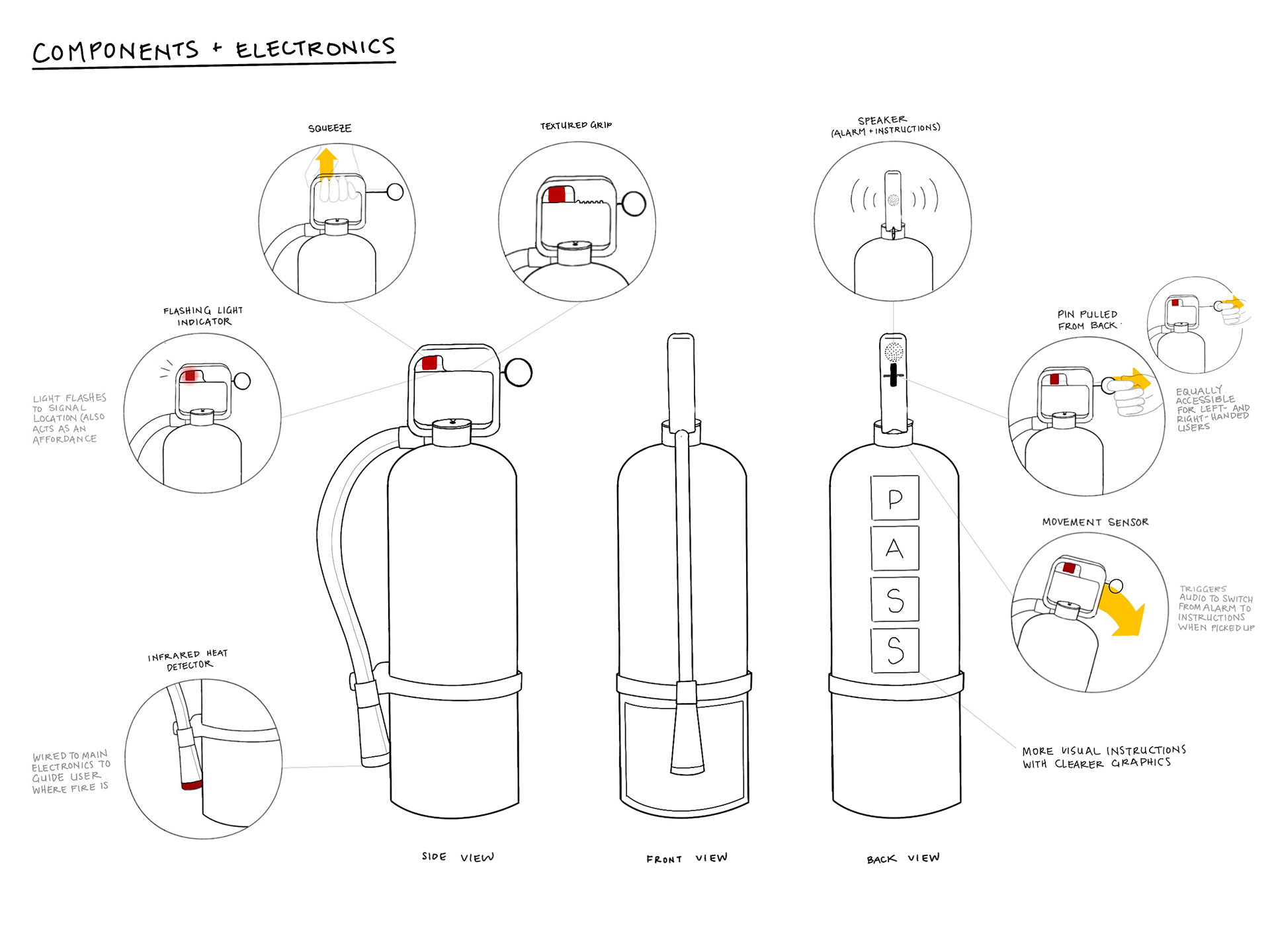 Sketches of components and electronics. 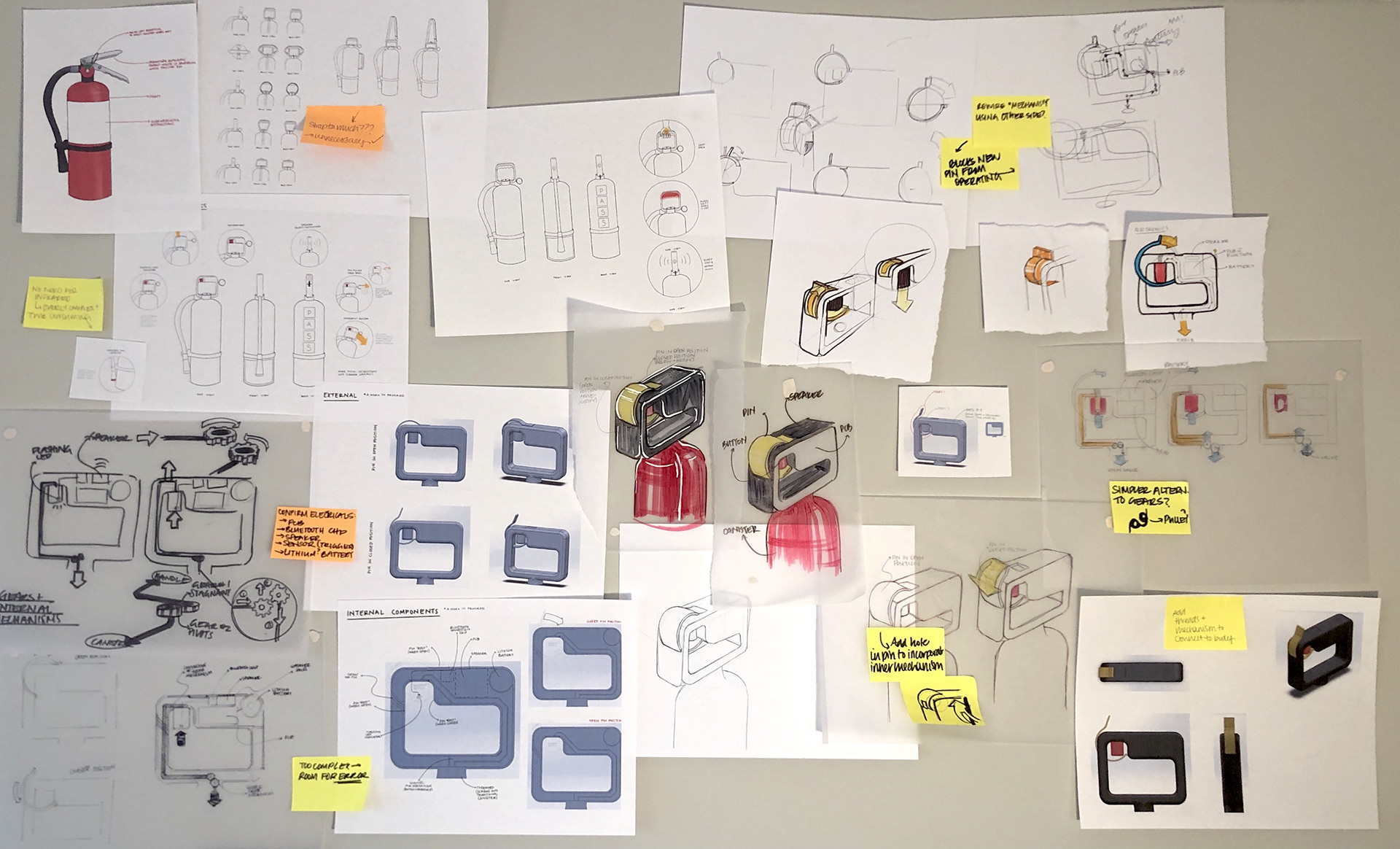 Wall of sketches and process work with annotations.

A teardown (see below) allowed me to understand that the purpose of the squeeze mechanism on the current models is to open a valve between the handle and the canister, causing a reaction that allows the agent to be expulsed through the nozzle. This meant that the primary mechanical function of the redesigned handle would be to open the valve that leads to the canister. Sketches explored variations where the valve-opening mechanism and pin would go through the back of the handle (see above). But, this caused an issue: having the pin at the back of the handle made it so that the user would need to use both hands to operate the extinguisher, which is difficult for those who have lessened or no mobility or strength in one arm, or who find the canister to be too heavy to hold solely by the handle.

Squeezing the handle pushes the valve down to open it on current fire extinguisher models.

To address these concerns, it was understood that the pin's sole purpose is to prevent the button from being pressed (or the handle from being squeezed in a traditional extinguisher) and therefore didn't need to be a "pin" and could be designed as a different component, as long as it prohibits the user from prematurely pressing the button. Concept iteration sketches led to the development of a redesigned round "pin" placed on the front of the handle. This way, it could be pressed down with the thumb to access the button with the index finger of the same hand.
It was then determined that the button-operated, valve-opening mechanism could not run through the back side of the handle as that is where the PCB and other electrical components would be housed, meaning it also had to run through the front part of the handle. A slot was added to the pin component, allowing the valve-opening mechanism to pass through to the bottom of the handle. 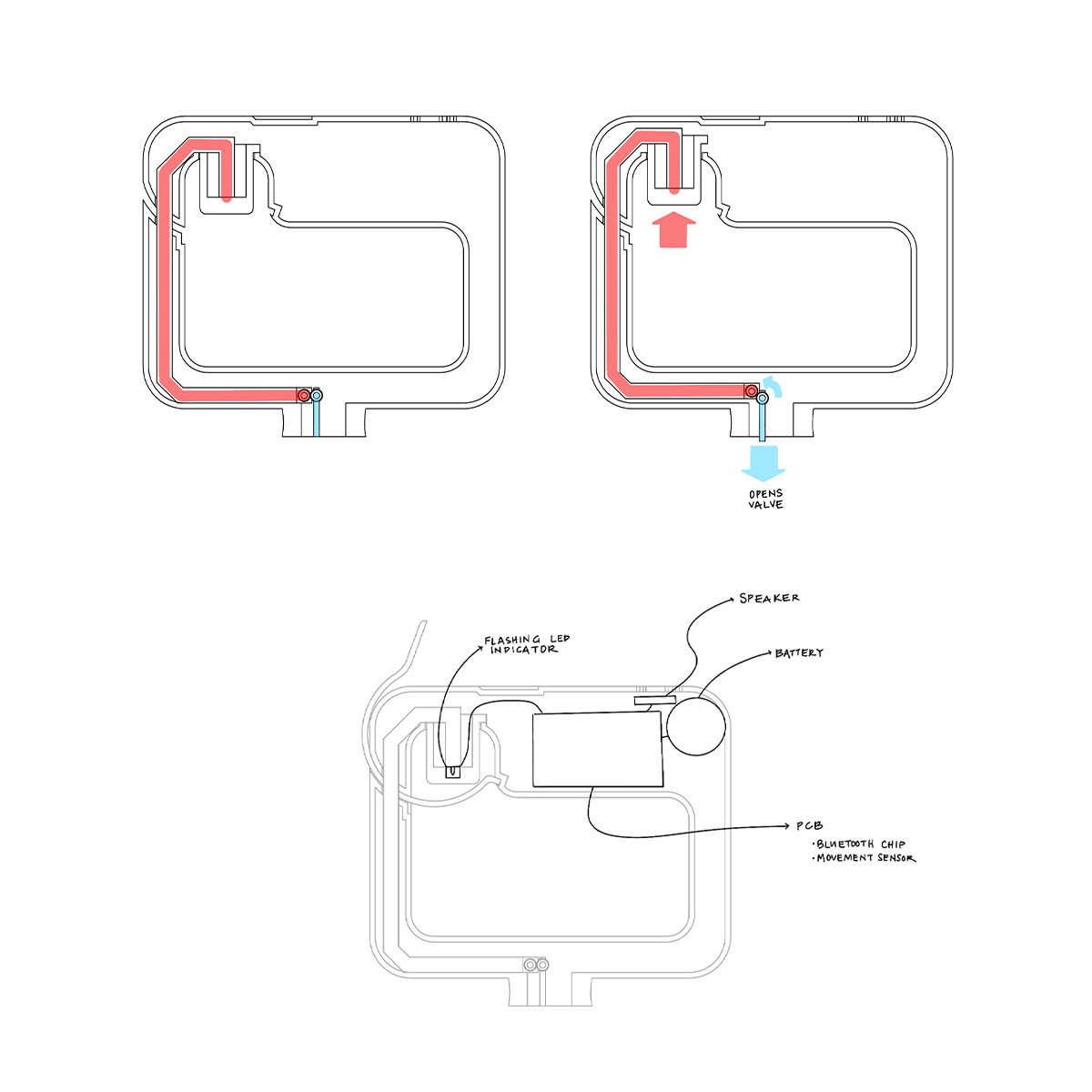 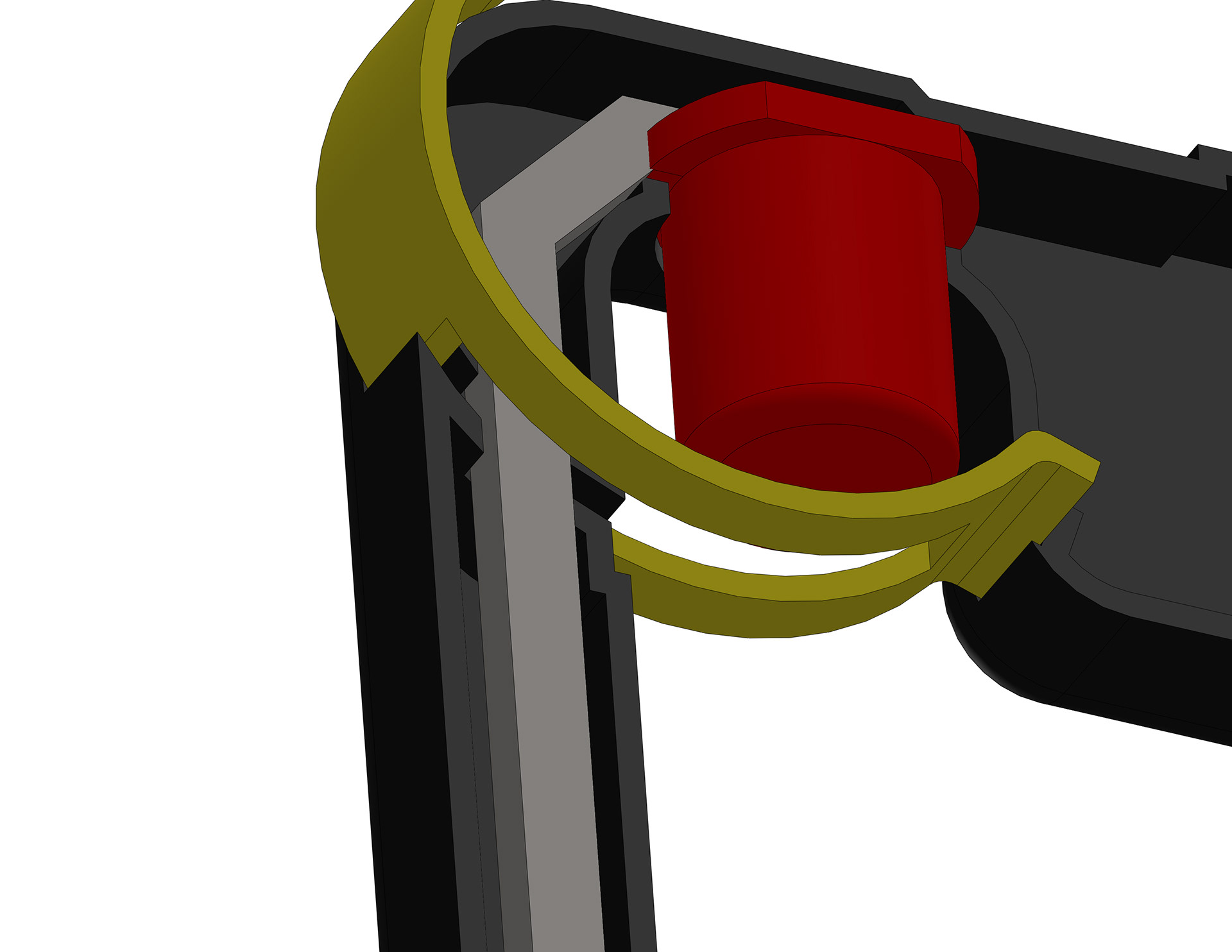 Handle internals with the button mechanism passing through a slot in the pin component.

Prototypes & Testing
Various handle types were tested to determine the most ergonomic type of button and its placement within the handle. Two 3-pound weights were used to simulate the weight of the canister with agent. 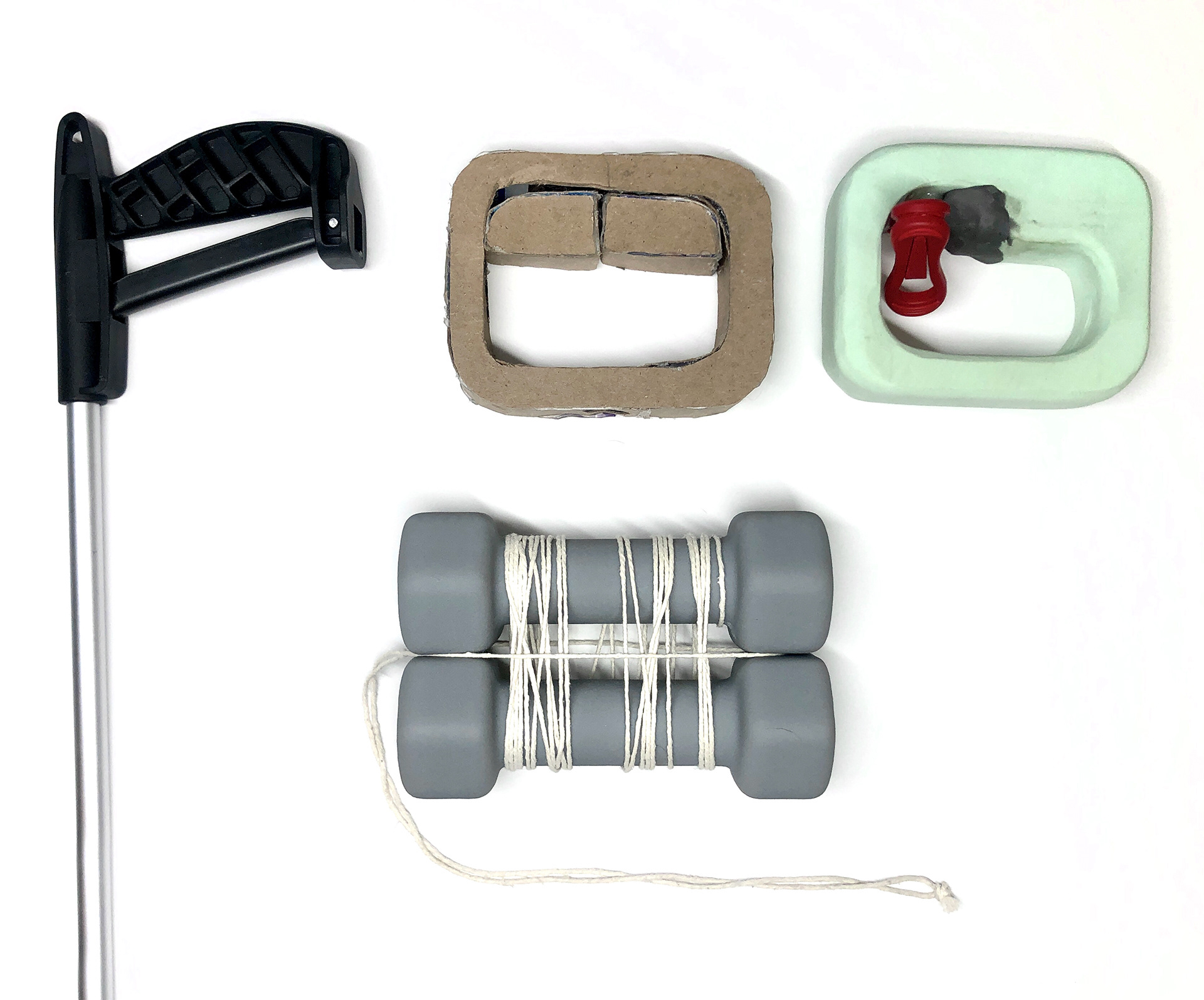 Testing the one-finger squeeze. This was by far the most successful layout.

Once the overall form was determined, LEGO and Meccano prototypes were created to explore the mechanical functionality of the internal components.

A Meccano prototype was created to test how the upward button-pressing motion could translate to a downward valve-opening motion. It was determined that a simple gear mechanism would allow for this to happen. Here, the button is represented as the blue part being pressed up, and the valve is represented as the bottom of the screw attached to the large green gear on the right end of the prototype.

Adding a coat of Gesso to the canister before sanding and painting it.

A high-density foam block was turned on the lathe to create the canister body. 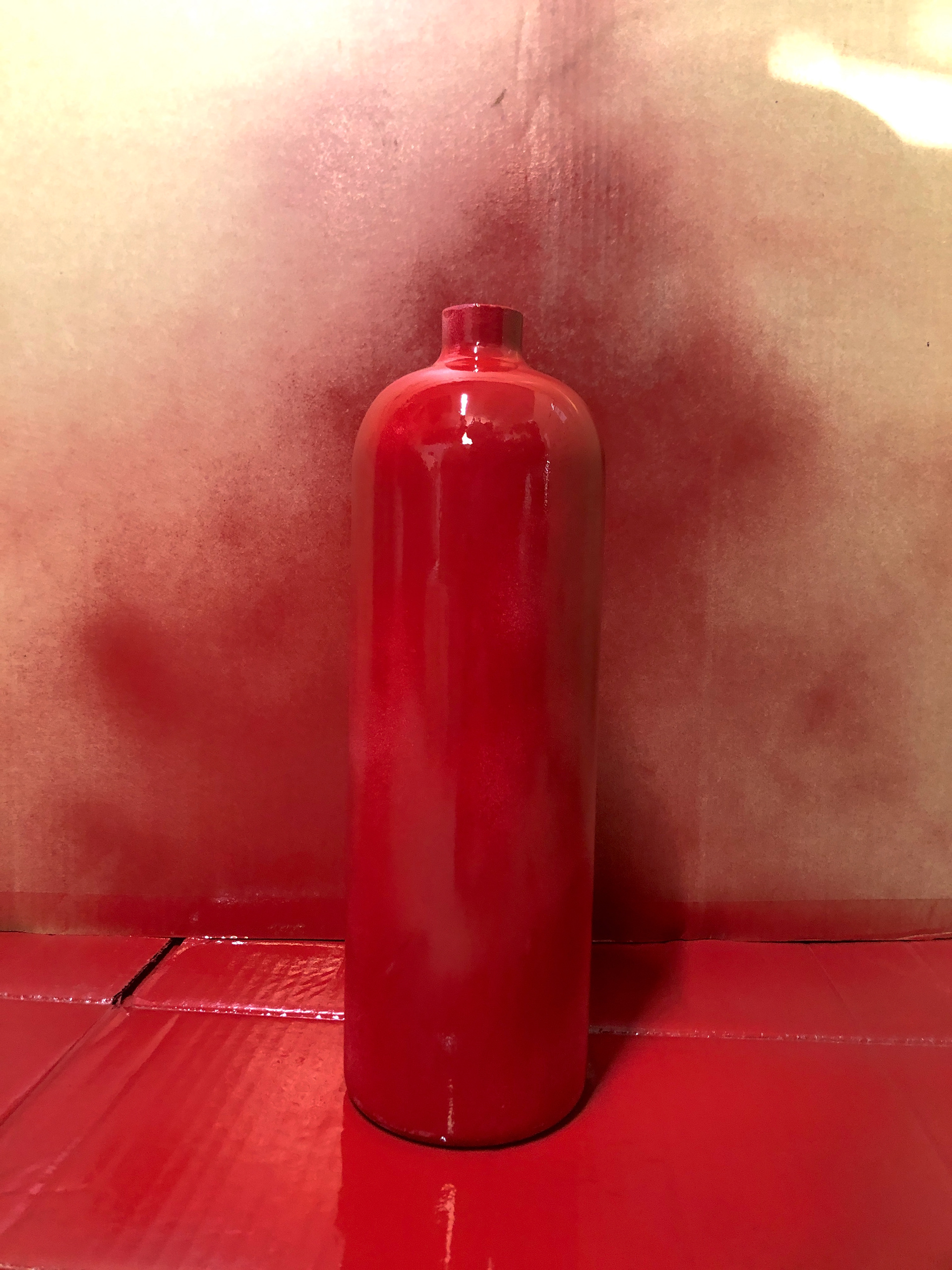 Canister after two coats of paint. 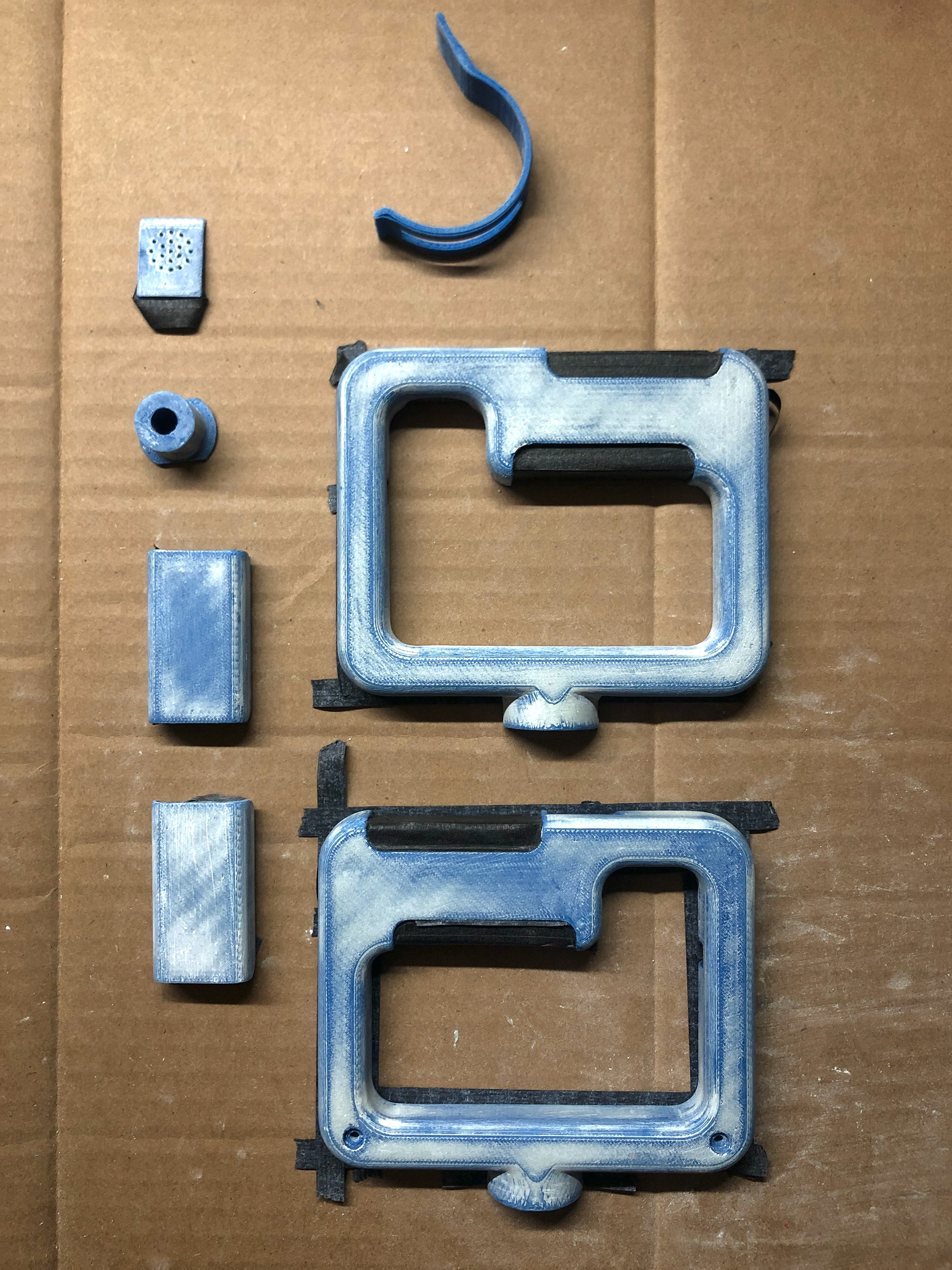 3D printed handle parts after having Bondo applied and sanded down (pre-paint).

School of Industrial Design | Carleton University | Year 3
↑Back to Top